I took some photos to compare an original pre-war aluminum Wehrmacht mess kits, with some postwar versions. The most important thing to understand is that there are postwar mess kits that are identical to real ones, as well as some that are very close, and some that are more different. 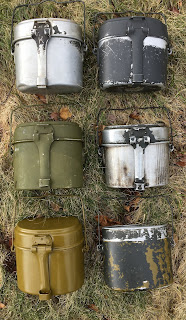 In the above picture, in the top row, the one on the left is an original pre-war German Wehrmacht mess kit. The one on the right is a postwar Austrian mess kit. It has a postwar maker and date stamp, and the lid of the mess kit is perhaps a fraction of a centimeter taller than the original (although this varies somewhat from maker to maker on originals). Visually, without inspecting the markings, the mess kit itself is indistinguishable from the pre-war Wehrmacht model. The paint is the wrong color. Stripped and repainted, in my opinion, this is perfect for use.

There are two other postwar styles that are identical to the pre-war Wehrmacht kits, that I do not have to show: some 50s dated German ones, some of which were made by some of the same factories that made them for the Wehrmacht; and postwar Romanian issue mess kits.

Back to the group picture, the second row: on the left is a Soviet mess kit from the 50s. This is very nearly identical to the first Wehrmacht model, with two exceptions. I have included photos that show these differences in detail. Firstly, it has three rivets instead of two, holding the handle on to the top part. It also lacks the three small impressed measuring lines that were on the front of the bottom half of the kit. The most common wartime Wehrmacht model also lacked these measuring lines, but these had a steel handle on the top part, instead of the prewar aluminum handle. Original used and issued kits are very often found mismatched, even when they appear to have been used that way during the war; it's not at all implausible that a soldier in the war could have used a wartime "bowl" and a pre-war "lid." There were no Wehrmacht kits with three rivets on the handle; whether or not this difference renders this type unsuitable for reenactment is subjective. 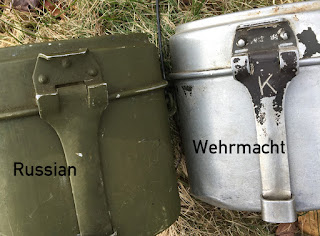 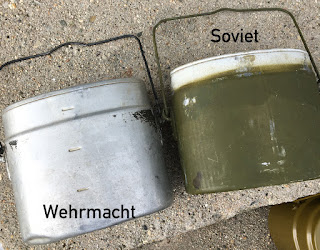 On the right in the group photo, in the second row, is a "Frankenstein" kit put together with a postwar East German NVA bottom, and a postwar West German police lid. The East German kit had a lid with no strap retaining loop, which in my opinion is visually and functionally so different from the Wehrmacht kit to render it unsuitable for reenactment use. The bottom, on the other hand, is very close to the Wehrmacht type. The difference is on the cast attachment fittings for the wire bale. The Wehrmacht type is riveted on with two small rivets. These rivets are not visible on the East German one. The exact size and appearance of the rivets varies on Wehrmacht kits, but they are always there. The top of this "Frankenstein" kit is a from a postwar West German kit. The bottom is in my opinion not suitable for use, and I will show it later, but the top is identical to pre-war Wehrmacht issue, except for the markings. I used to use this "Frankenstein" kit myself, before I found a postwar Austrian one to use.

Of the four types of mess kits previously described, we would allow any of them to be used in Sicherungs-Regiment 195, though we discourage use of original kits as they are historical objects with a collectible value, and we cook with ours over fires and use them at every event; I would cringe to subject an original war relic to that kind of abuse. The mess kits on the bottom row in the group photo have parts that I would not allow to be used in my unit. On the left is a Russian one, a type used from the 50s into at least the 80s (probably even later). This has the aforementioned three rivets on the handle, on the top. On the bottom part of this kit, the attachment fittings for the wire bale are totally different from the Wehrmacht versions. This difference on the bottom part is too obvious for me to regard it as usable. On the right in the bottom row, is the postwar West German police kit lower half. This also has the Russian style bale attachment fittings. 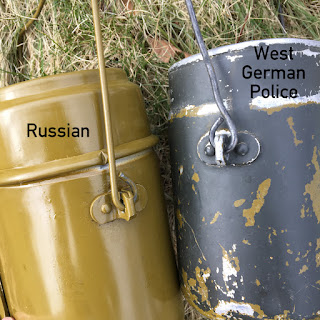 Where to find these? Quantities of postwar Romanian and Austrian mess kits pop up on eBay from time to time. I keep an eye on the various Facebook sales groups where reenactors sell items that are no longer needed, as there are many of these mess kits in circulation. I also look at Soviet buy/sell/trade pages where the Russian ones that I regard as usable (with the German type bale fittings) come up every so often.
Posted by Chris P. at 6:02 PM 1 comment:

Buckwheat groats are a staple grain in Russia. They are healthy and delicious. Where I live, in the USA, there are Russian specialty grocery stores that offer several brands of buckwheat groats. 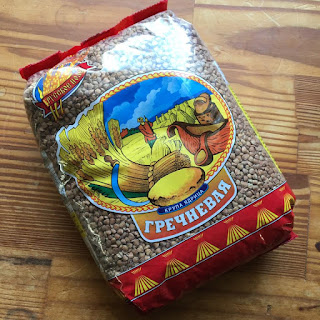 Wehrmacht personnel fighting on the Eastern Front during WWII had to learn to eat local food that was available, including buckwheat groats. The following recipes were distributed by the supply section of the 281. Sicherungs-Division, in an order dated December 12, 1941.

Trim some fat from the meat, fry it and set it to the side. Dice the meat, fry it, add the finelty chopped onions and fry together for a short time. Add the washed groats, together with water (45 parts water to 1 part groats). Boil for about 1.5 hours. Peel and chop the vegetables, peel the potatoes and slice or dice, add to the pot and cook until done.
The finished dish can be seasoned with salt with yeast extract or seasoning, or thickened with soy.
The flavor of the stew can be improved by using wurst broth instead of the water.

Fried Dumplings (or "Falscher Hase") Made with Buckwheat Groats

Cook the groats with water (5 parts water to 1 part groats) until you have a firm mass, allow to cool. For meat, take if possible a mixture of half pork ad half beef, and finely grind it in a meat grinder together with the raw onions.
Mix the meat and groats together well, add salt, pepper, soy and grated Zwieback as a binder. Marjoram or savory, if used, should be used very carefully. After mixing well, it is recommended to put the mixture through the meat grinder again. The purpose of this is to achieve maximum mixing of the ingredients, which is of particular importance.
Roll the dumplings (or for "Falscher Hase, the pieces) in grated Zwieback and fry in hot fat.

Cook the groats with water (5 parts water to 1 part groats) until you have a firm mass, allow to cool. For cooked meat, take if possible a mixture of half pork ad half beef, and finely grind it in a meat grinder together with most of the raw onions and soup greens. Mix the meat and groats together well. Fry the rest of the onions in the sunflower seed oil until brown, add to the mixture. Season with salt and pepper.
If the spread is a little too thick, add some water or sausage broth. The completed mixture yields 120 g.

Possibilities for use: Buckwheat can be used for soup, porridge, dumplings, risotto, groats, and sweet dishes.
In addition, buckwheat is a great substitute for potatoes in stews. Cook the buckwheat in the stew 30-40 minutes.
Buckwheat thickens when it soaks. In general 20-30 g per person is sufficient.
Buckwheat is a good way to extend ground beef in recipes.
In this manner dry buckwheat can be made into a thick porridge:
The ratio is 300 g buckwheat to 1 liter water.
The cooled buckwheat is thoroughly mixed with the ground meat.
Per person, you need:
50 g meat
20 g buckwheat
65 g water

Taking into account losses in cooking, it yields about 120 grams.

Making Grützwurst with Buckwheat
50 g meat with bones, 20 g dry buckwheat
Cook the meat until tender. Soak the buckwheat in the broth to make a thick porridge. The ratio is 200 g buckwheat to 1 liter broth. The cooked meat is ground and mixed in with the groats. Season as usual.

Cook 20 g buckwheat and a finely chopped onion in a little fat. Peel and dice a medium potato, finely chop 100 grams vegetables and add them to the fat, cook briefly. Add 1/3 liter water, bring to a boil, add salt, cook until done.

Fry onions in fat, add buckwheat and cook together very briefly. Add liquid (ratio: 3 parts liquid to 1 part groats), bring to a boil, cook on low heat until done. After cooking, mix in some grated cheese or cheese powder.


Buckwheat with Beef or Mutton

Peel and quarter tomatoes and fry in a little fat. Make the buckwheat groats as described above, 10 minutes before being done, add the tomatoes.

Make a mixture of 1 liter buckwheat flour, 30 grams wheat, salt and a little warm milk.  Beat into a thick dough and leave 2 hours in a warm place. Make dumplings using a spoon covered in flour. Drop into boiling salt water, cook uncovered until done. Serve with brown butter or some fried fruit.

Stir 1 part buckwheat into 2 parts boiling water. Bring to a boil, cook on low heat until done, about 20 minutes. Allow to cool and put through a meat grinder with 1 small onion. Mix together with ground meat (1 part buckwheat to 1 part meat). Season with salt and pepper, form into dumplings with wet hands, fry in oil.

Soak 75 g buckwheat in 1/4 liter buttermilk to form a thick porridge. Add salt, fried onion, very little garlic, chopped parsley, 50 g flour. Mix all together and add more buttermilk if too thick. Form into little cakes, fry in hot fat. Meant as a side dish to meat dishes, or in a sauce can also be a main course.

Comparison photos showing 5 unaltered original enlisted issue wool Heer M43 tunics. This first photo shows the collar and lapel shape. To take these photos I unbuttoned the top button and held the collar open as if it were pressed open. Many differences are readily apparent. Sometimes the collar extends past the lapel, sometimes the lapel is wider than the collar. The relative widths of the collar and the angles of the various shapes are very visibly different. 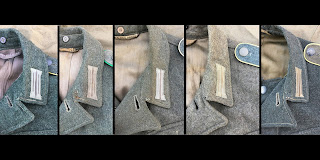 This photo shows the sleeve shapes. I laid the sleeves as flat as I could to show the shape. They are not all the same. There is a persistent reenactor legend about "curved sleeves." I'm not sure what is meant by that- but see for yourself. 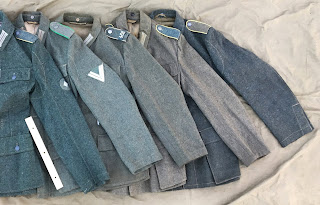