Paperwork for a living history impression

Reenactors interested in the finer details of an impression often ask what would constitute an ideal set of paperwork for a first-person persona. The answer is always that the best paperwork that a reenactor can carry is paperwork that he understands and that he can relate to his portrayal. The Soldbuch is the crux of personal paperwork and knowing what is written in there and what everything means is a key step in a first person impression. The flap in the back of the Soldbuch is a good place to keep things like reproductions of period photos, most are small and fit in there easily. Anything that a reenactor can understand and explain and build a story around will be better to carry than even perfect reproduction paperwork if one doesn't know what it means or how it relates to the character being represented.

In the realities of war, there were an endless number of variables regarding what paperwork was carried. There were regulations, of course, but these regulations seem to have been more or less widely disregarded, and much of what was actually carried on a day-to-day basis seems to have depended heavily on such variables as personal preference, unit or type of unit, area of operations, etc. It seems like there were few hard and fast rules as to what was carried and what was not, what was retained and what was discarded. The Wehrpass was not supposed to have been carried by the individual soldier but some soldiers went into captivity carrying these so this must have happened at some times, for some reasons.  Having said all that, here are our conclusions based on studies of more-or-less untouched paperwork groupings. Others may have come to different conclusions. 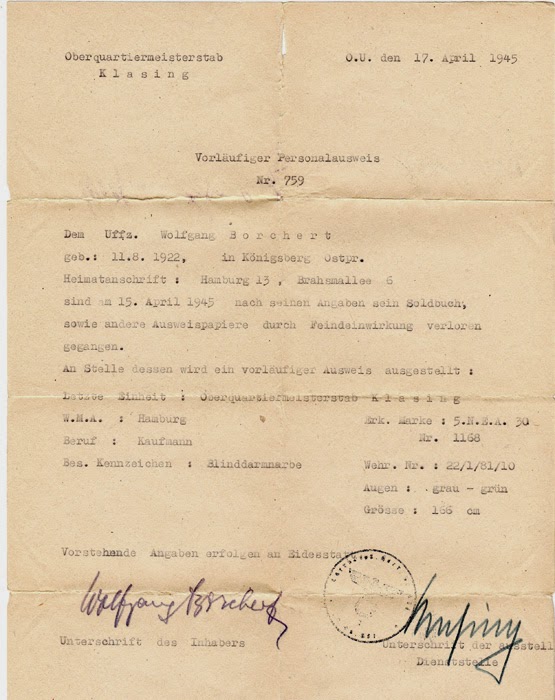 SOLDBUCH: As stated, this was the basic individual ID and is the cornerstone of personal paperwork from a reenactment perspective. Some soldiers were issued Merkblätter which were small leaflets about topics including gas warfare and various ailments, these leaflets were supposed to have been glued into the Soldbuch but the majority of original Soldbücher, including many books issued early on and carried throughout the war on all fronts, do not have these (even when other various documents are still associated with the Soldbuch) and so their issue was either rather limited or the mandate to keep these in the Soldbuch was widely ignored.

OTHER ID DOCUMENTS: Soldiers were issued many different kinds of lesser ID documents which were issued right down to Kompanie level in some cases. This category can include things as simple as small signed and stamped paper scraps attesting that the soldier belonged to a particular unit, as well as various kinds of photo IDs such as the military driver's license or the Dienstausweis, and all kinds of passes and permits. 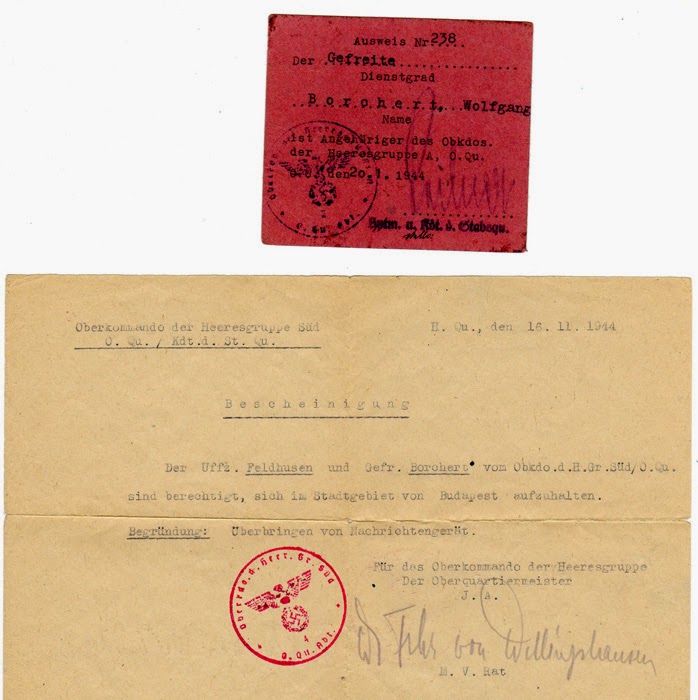 TRAVEL DOCUMENTS: Soldiers do seem to have retained various kinds of travel documents such as the Dienstreiseausweis or the Wehrmachtfahrschein even when the travel was completed, for whatever reason. There were also documents that permitted soldiers more or less free travel in specific areas for specific purposes, these also seem to have been retained. There were also passes to enter certain cities, some of these were valid only for a specific occasion, others were valid for longer periods.

LETTERS FROM HOME: Regulations stipulated that letters from home were not to be carried in the field to deny the enemy any intelligence contained therein. In reality, soldiers did keep and carry these, sometimes accumulating large numbers of them when circumstances permitted. Feldpost was second only to ammunition in the supply system, and getting mail from home was an important feature of the life of the Landser. 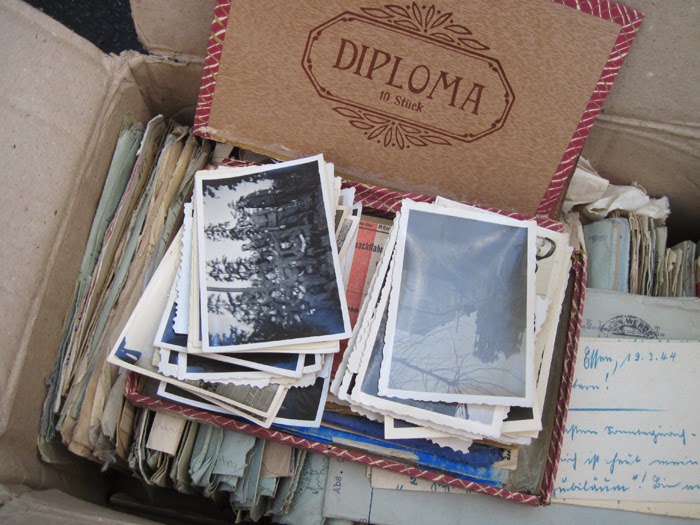 PERSONAL STUFF: By this, we mean really personal. Many soldiers carried small booklets in which they would record addresses or keep records of mail sent and received. Some soldiers kept journals in these small notebooks. They seem to have been very common. Photos of loved ones were also carried by very many soldiers.

EPHEMERA: We find lots of stuff in paperwork groupings that were intended to be discarded but that were kept for whatever reason. A page from a calendar, a little piece of newspaper, a blank form or a receipt for hay or for cabbage, perhaps these were used as bookmarks, perhaps they had some personal significance known only to the soldier, or maybe it was just pocket trash. Some companies would even send advertisements in various forms to soldiers at the front and sometimes the recipients would hold on to these.

CIVILIAN STUFF: Many soldiers seemed to have carried documents related to their civilian lives, even when these documents would seem to have been useless at the front. Insurance cards, post office box receipts, paperwork regarding bank accounts, or similar stuff.