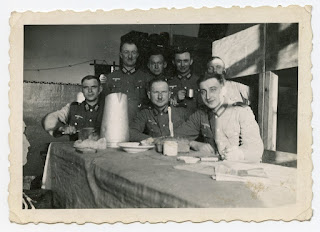 A) Rations in Peacetime

Remarkable by today’s nutrition standards is the lack of fresh fruit, and the low amount of salad and dairy products.

B) Rations in War

-750g bread
-150g fat (separated into 60-80 grams butter, Schmalz, or margarine for spreading and 70-90 grams lard or vegetable oil for preparing a warm meal)
-120g sausage (fresh or in cans) or tinned fish or cheese
-up to 200g marmalade or artificial honey
-7 cigarettes or 2 cigars

b) Prepared as Warm Rations

And depending on availability eggs, fruit, chocolate etc.

The rations for the civilian population at the end of 1939:

Converted to Calories per Day:

The daily calorie values for normal users in the occupied territories at the end of 1943 were:

Two full sets of these rations, which were secured by special packaging so as not to spoil or be damaged, were carried with the field kitchen for every soldier. The full iron ration was:

Every soldier in action on the front was given a small iron ration from this stock, which could only be eaten when ordered- however, this was soon found to be an impossible order. The shortened iron ration consisted of 250g hard zwieback and 200g tinned meat and was kept in the bread bag or Tornister.

Rations in the Reality of War

For those on the front line in combat, the ration was usually issued 24 hours in advance, under cover of darkness.

“At dusk, the men in their positions awoke from their mole-like lifestyle. Carrier troops went to the rear, to pick up food and mail. The latter was generally at least 2 weeks old. For warm rations, there was mostly a canteen of coffee and a mess kit of thick soup. The cold rations were a half loaf of bread, a few spoonfuls of margarine and artificial honey, as well as 150g of meat and cheese. Everyone had to decide for himself how to use the rations over the next 24 hours.” -W. Felten, 65. Infanteriedivision

The aforementioned rations were mostly the same for front-line soldiers even to the end of the war, except in special circumstances (i.e. when surrounded). With the exception of the 6. Armee at Stalingrad, no Soldat who was with his unit starved to death.

However, with the Ersatzheer, starting in 1944, there was a clear decrease in the quality of the rations. The amount was the same, but meat and fat were being replaced with more potatoes and dried vegetables.

In contrast with all other armies of WWII except the Red Army, the Wehrmacht had the same rations for officers and enlisted men. This rule was, almost without exception, obeyed in all units up to the level of Korps staffs. Although there were some exceptions, especially during the retreats of 1944.
Posted by Chris P. at 8:58 AM