Beyond the Blank Fire: A realistic approach to recreating life in WWII

WWII reenacting has traditionally centered on public displays, which are ostensibly for educational purposes, and private combat simulations that are usually referred to as "tacticals." In tacticals, reenactors take to a make-believe battlefield, and blast away at each other with real or simulated weapons until the end of the event. Participants usually state that they take part in tacticals to get a feeling of, "this is what it may have been like." Unfortunately, as most any long-time reenactor will readily admit, there is simply no way to realistically recreate field combat in WWII. There are few, if any, tanks or aircraft, few heavy weapons, no artillery. Reenactment combat generally happens at, or near, hand-to-hand distances- not the ranges at which Wehrmacht strategists anticipated- which makes reenactment use of correct tactics difficult or impossible. Further, the realities of reenactment sites often necessitate attacking positions from directions that would not be feasible, or defending positions unsuitable for defense. Virtually no reenactment unit actually takes the field in Bataillon or even Kompanie strength -- independent units of 10-15 guys are typical at a reenactment battle. In the reality of war, it is possible to aim, and fire, at a target nearby and miss. Additionally, many soldiers likely were hit by unaimed shots fired from great distances. Blank-fire simulated combat is, on the whole, a very poor way to create a realistic representation of something that really happened.  Worse, "public tacticals," for educational purposes, are entirely unsuitable.

In Sicherungs-Regiment 195 we strive to precisely recreate a historical place and time. This mandates an approach starkly different from reenacting as it has traditionally been understood. Firing a blank at a reenactor and feeling indignant when he does not "take a hit" is boring and puerile, and typically leads to disappointment, animosity, and hobby burnout. We seek a more realistic and immersive experience. Those of us who founded this unit are all "veterans" of the blank-fire "combat" scene. Whatever thrill or rush might once have been obtained from the bangs and flashes of a sham battle are long-gone. What remains, though, is a passion for historical recreation. Bringing the past to life through painstaking recreation of all details of an earlier era is truly central to reenacting; it is the crux of our hobby. That is what is important. The means of this recreation, or the choice of activity being recreated, are secondary things. Spending a night in a foxhole, without firing a shot, is a very realistic experience. (505th RCT D CO)
Are there activities that can be recreated in a more authentic way, that can better give a true feeling of "this is what it may have been like?" Absolutely. There is no doubt that the lure of the tactical draws many people to our hobby. But, truth be told, paintball or airsoft, where real projectiles are flying through the air, may be a more realistic option for those who want the feel of hunting and being hunted -- to say nothing of the real military, which undoubtedly attracts many young people yearning for a taste of battle. It is our belief that focusing the WWII reenactment hobby on hoak battles does our hobby a disservice. Demographics are changing, most reenactors are no longer the sons of the WWII veterans. A more diverse hobby with a wider range of options for participants could be larger, and more inclusive, without any compromise on authenticity. It is no secret that many, or most, reenactors would not be considered fit for real front-line combat duty. Yet,  paradoxically, virtually all reenactment groups exclusively portray line infantry units. It is our hope that this will change, and we see ourselves as part of this change. 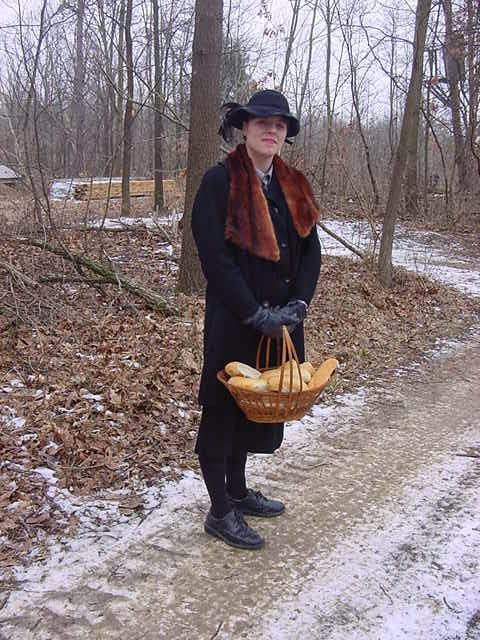 Even units portraying combat infantry formations need not be centered exclusively on blank-fire combat. Soldiers in every kind of unit deployed to an area of operations. There, they set up quarters, prepared and issued rations, performed drill, marched, had inspections... As the old saying goes, "War is hours of boredom punctuated by moments of sheer terror." A focus on battle reenactments means endlessly attempting to repeat those moments of terror, while avoiding all those hours of more typical, and often mundane experiences. Field soldiers constructed positions, manned observation posts and foxholes, performed scout/reconnaissance and security patrols, stood sentry duty, and ran messages to rear areas. All of these are things that can be realistically portrayed, with the men and means available to a reenactment group. 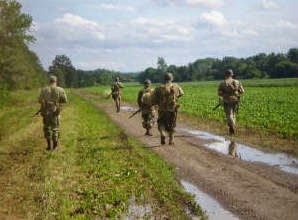 Patrols do not always have to end in engagement. Sometimes nothing is found. (Unknown unit)

We are a rear-area unit and we have no shortage of events that we can participate in while being true to our rear-area impression. Last week, a WWII German reenactor in Texas was shot at a battle when a GI reenactor began firing live rounds. That is a commitment to realism that we will not make. In other scenarios, we readily find the authenticity we seek, without any compromise. 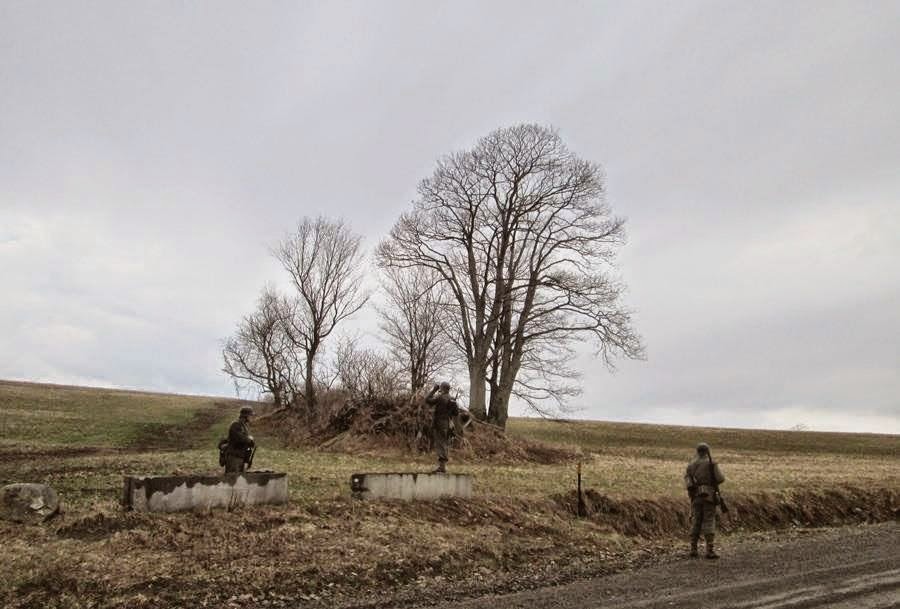 We reject the notion that tactical battle reenactments are necessary for our hobby. Use of real weapons in an increasingly complex world of state firearm regulations and noise ordinances actually make reenactments more difficult. We embrace the idea of a hobby in which battle scenarios are just one type of private event, no more important than other events, which do not offer a "trigger time" option. We call for all reenactors to keep an open mind, and consider non-combat immersion events with varied scenarios. Our hobby can thrive even without blank-fire tactical if we choose to focus on the historical recreation, which is at the very heart of what we do. Last month, some of our members helped with a Wehrmacht headquarters clerk office vignette at the annual Battle of the Bulge event at Fort Indiantown Gap PA, the largest WWII event on the East Coast. We issued identification documents and passes to hundreds of event participants. The positive feedback on this functional recreation of a Wehrmacht office was overwhelming. While typewriters and fountain pens have a limited appeal, such a vignette could be incorporated as one part of any field immersion event, together with countless other realistic impressions that would not necessitate any opponent at all. 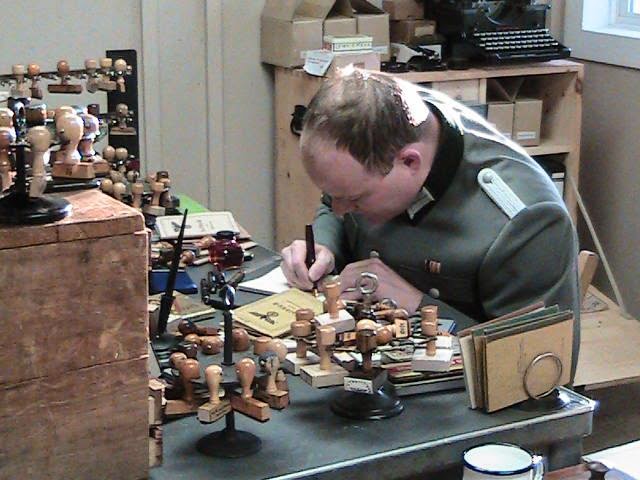 We understand that tacticals will always be a part of the WWII reenactment hobby. However, we desire to serve as a constant reminder that, just as line infantry is only one of a myriad of possible portrayals, combat is just one of countless activities in wartime soldier’s life. These other countless activities can serve as the focus of an immersive and zoney event. 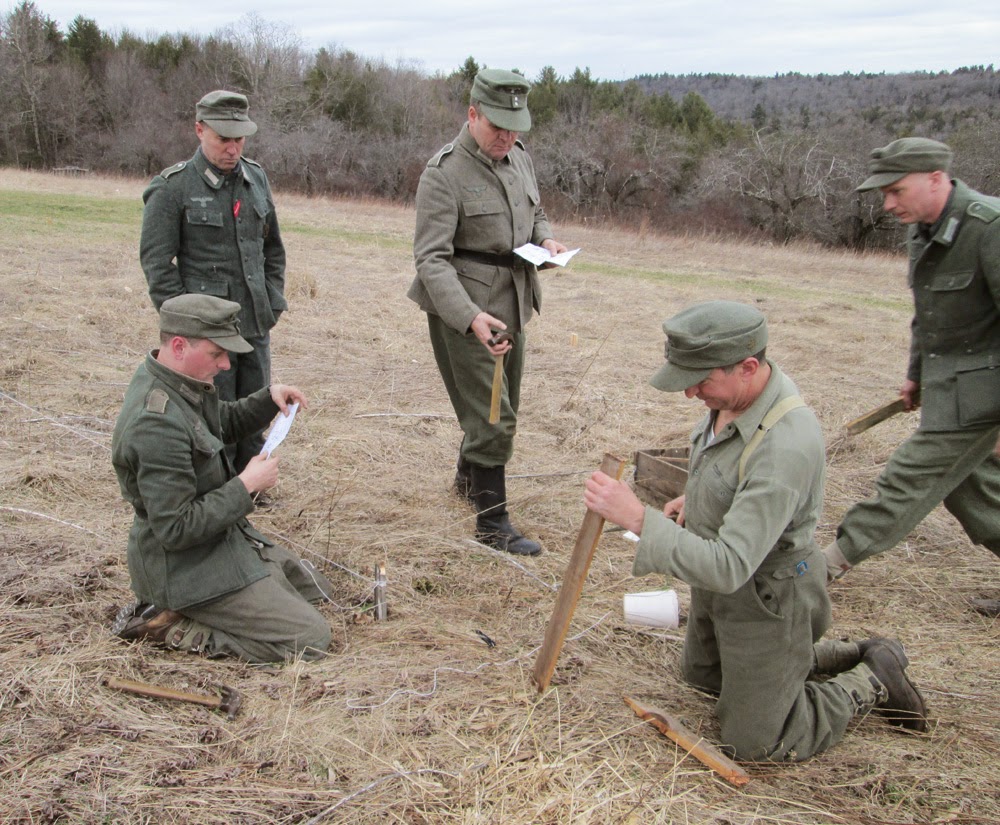